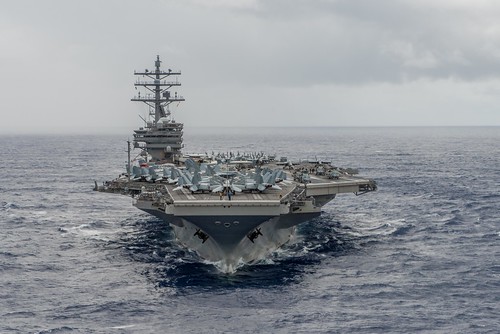 "Coming out of a long in-port maintenance period, we have to ensure that Ronald Reagan, CVW 5 and the remainder of the strike group are integrated properly as we move forward," said Rear Adm. Charles Williams, commander, Task Force 70. "As our ships' and our aircrafts' capabilities evolve, we have to do the same as a strike group. I look forward to sailing together as a cohesive unit, working with our allies and partners in the region, and continuing our persistent operations throughout the Indo-Asia-Pacific."

To start their 2017 Patrol, Ronald Reagan and CVW-5 are slated to conduct flight deck and carrier qualifications to certify their ability to safely launch and recover aircraft.

"We have a job to do," said Capt. Donnelly, Ronald Reagan's commanding officer. "We have tested our equipment and our Sailors' warfighting proficiencies as a ship. Now we have to focus on our primary job to re-integrate with our air wing so that they are able to conduct business and carry out our mission."

The qualifications will evaluate flight deck operations and pilot proficiencies, while operating many systems that have recently been overhauled or upgraded.

"I am truly impressed by the professionalism of our crew and our partners at Puget Sound Naval Ship Yard and Ship Repair Facility, Yokosuka over the course of our recent SRA period," said Donnelly. "Their outstanding accomplishments as a team to improve the material condition our ship lead to a seamless transition from dock trials, through sea trials, an ammunition on-load, and finally to resume operations in our AOO."