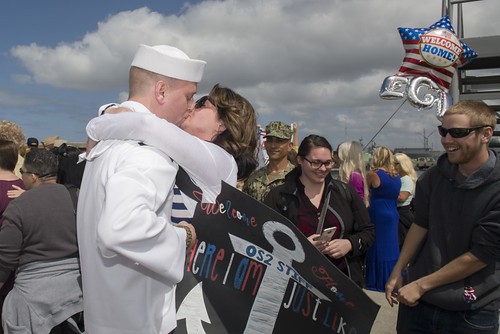 SAN DIEGO - Sailors and Marines of the Makin Island Amphibious Ready Group (ARG) returned to their homeport at Naval Station San Diego, May 15, after a successful seven-month deployment to the U.S. 3rd, 5th and 7th Fleet areas of operation.

During the deployment, more than 4,500 Sailors and Marines of the Makin Island ARG and embarked 11th Marine Expeditionary Unit (MEU) conducted maritime security operations and theater security cooperation efforts in support of regional security, stability, and the free flow of maritime commerce in the Asia-Pacific and Middle East regions.

"The Makin Island ARG/11th MEU team provided our commanders with the world's most capable sea-based rapid-response force. Our ships and the landing force they carried gave our commanders the operational flexibility they needed to respond to a range of crises, anywhere in theater, in a moment's notice," said Capt. Mike Crary, commander, PHIBRON 5. "After seven months of operations, I'm still impressed by this team's capabilities. They have performed superbly together - a testament to their professionalism and dedication - and I couldn't have asked to serve with a more motivated group of Sailors and Marines."

Throughout the U.S. Pacific and Central Command areas of responsibility, the ARG/MEU trained with partner militaries to enhance relationships with those nations and to strengthen proficiency in the execution of the full spectrum of amphibious operations. In 7th Fleet, Sailors and Marines worked with militaries and self-defense forces from Japan, Malaysia, Sri Lanka, and Papua New Guinea. While in 5th Fleet, the team participated in exercises with forces in Djibouti and Oman.

"Exercises like Tiger Strike with the Malaysian armed forces and Alligator Dagger in Djibouti included hundreds of LCAC (landing craft air cushion) evolutions and flight hours," said Capt. Mark Melson, Makin Island's commanding officer. "Moving the landing force ashore and working with our partners in those countries enhanced our collective crisis-response capabilities and ensured the team's readiness to react to anything our commanders needed."

This was the third deployment for Makin Island, the seventh for Comstock, and the first for Somerset.

"I am very proud of Somerset's Blue and Green Team and their ability to quickly adapt to changing mission sets on this deployment," said Somerset's Commanding Officer Capt. Darren Glaser. "From our participation in the first-ever theater security cooperation event with the newly-formed Sri Lankan Marine Corps, to our bilateral exercise with the Royal Omani Forces in Exercise Sea Soldier, and executing a range of amphibious operations in the Middle East, Somerset has worked extraordinarily hard during this deployment to accomplish every mission asked of us. The team can be proud that they truly lived up to the memory of this ship's 9/11 namesake and set an incredibly high bar on Somerset's maiden deployment."

"We were honored to visit several important partners throughout deployment," said Cmdr. Bradley Coletti, commanding officer of Comstock. "These were once-in-a-lifetime experiences that allowed our Sailors and Marines to enjoy some well-deserved down time while learning about many of the world's most diverse cultures. The engagements were critical in demonstrating U.S. commitment to our partners and the mutual goals of enhanced regional security and stability."

The ships steamed more than 45,000 nautical miles throughout the Pacific and Indian Oceans, conducting operations in areas including the Gulf of Aden, Arabian Gulf, and South China Sea.

Aboard Makin Island, the ARG flagship, the crew consumed nearly a half-million eggs, 17,000 pounds of coffee, and 32,000 pounds of ground beef. The ship's store sold $1.5 million in merchandise, the barber shop performed 8,000 haircuts, and the post office received 120,000 pounds of mail. The ship's engineers produced more than 17 million gallons of fresh water for the crew, and the flight deck saw more than 6,000 successful aircraft launches and recoveries.

"This crew should feel extremely proud of what they accomplished over the last seven months. Right from the start, they conducted relevant, real-world operations in direct support of our country's national security goals," said Melson. "Throughout deployment, our Sailors and Marines worked night and day to stay at the top of their game, ready to answer the call. They're the reason we were always in the right place at the right time, ready to put Marines ashore to perform a wide range of missions. This team can hang their hats on a job well done, and now it's time to focus on being back home and reuniting with our families and loved ones."

U.S. 3rd Fleet leads naval forces in the Pacific and provides the realistic, relevant training necessary for an effective global Navy. U.S. 3rd Fleet constantly coordinates with U.S. 7th Fleet to plan and execute missions based on their complementary strengths, to promote ongoing peace, security and stability throughout the entire Pacific theater of operations.