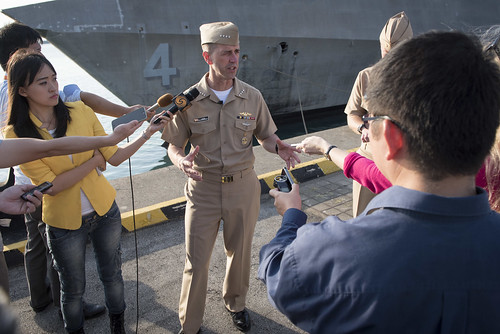 The ships and crew were joined by Chief of Naval Operations Adm. John Richardson, who was hosted by Republic of Singapore Navy (RSN) Chief Adm. Lai Chung Han for the RSN 50th anniversary celebration and International Maritime Review along with engagement associated with IMDEX.

"Let's congratulate the Republic of Singapore Navy for their 50th anniversary; their golden jubilee," said Richardson. "What better way to celebrate that anniversary than an International Maritime Review in the company of so many partner navies. It's very clear to me that partnerships are built into the Singapore DNA. The fact that the United States Navy was here with two ships demonstrates our commitment to partnerships as well."

"We were very honored to have Coronado showcased during Singapore's International Maritime Review," said Cmdr. Douglas Meagher, commanding officer aboard Coronado. "This event, and the International Maritime Defense Exhibition that followed, served as a reminder of how important the oceans are to our collective prosperity as sea-faring nations. Our Sailors continue to excel at this mission while building maritime partnerships both at sea and ashore."

IMDEX is the Indo-Asia-Pacific's flagship maritime defense show and provides an avenue for stakeholders, industry representatives and naval leaders to liaise and collaborate.

"We are excited and honored to have participated in IMDEX this year," said Cmdr. Claudine Caluori, commanding officer of USS Sterett. "We have built strong alliances and partnerships for decades that contribute to regional security and stability in the Indo-Asia-Pacific region, and IMDEX provided an opportunity to further enhance defense cooperation and reinforce these ties."

The United States routinely participates in International Maritime Reviews and trade shows like IMDEX to promote dialogue, stability and security cooperation throughout the Indo-Asia-Pacific region.