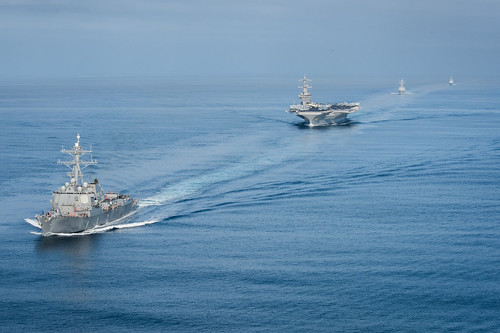 Group Sail is a pre-deployment underway which allows the TRCSG units to conduct exercises together in a maritime environment.

"We achieved two significant milestones this underway," said Capt. Craig Clapperton, commanding officer of Theodore Roosevelt. "First we completed TSTA early and with above average evaluation scores. This is an exceptional accomplishment given our compressed training timeline, and a real testament to the hard work and preparation by the Rough Rider crew."

Crescitelli said there is a thorough process of debriefing evolutions, learning lessons and incorporating those lessons into future events.

"We have a solid foundation from which to develop into a lethal combat force ready to execute COMPTUEX with precision," said Crescitelli. "The road will be long and not without struggle and hardship, but the resilience of our Sailors was readily apparent during Group Sail."

These real-world evolutions allowed the ships to execute many quality events that were indicative of deployed operations.

"We spent the second half of this underway in integrated training with the air wing, embarked staffs, and ships of the carrier strike group during Group Sail," said Clapperton. "Together we did very well and established the foundation of operations that we will build on for deployment. We completed several highly technical evolutions, successful flight operations and communication exercises. The Sailors and Marines on board performed very well, and I'm incredibly proud of the effort by this entire team. Their precise seamanship, airmanship and professionalism is impressive!"

With TSTA and FEP complete, Theodore Roosevelt returned to its homeport of San Diego and will begin preparations for its next test: COMPTUEX.