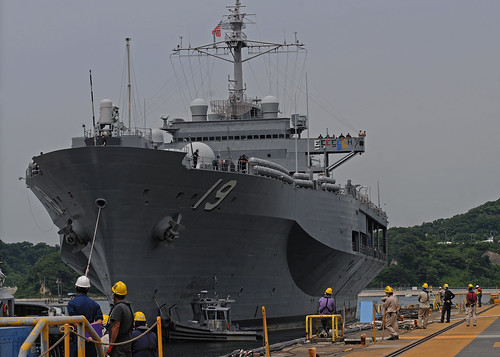 The Consolidated Afloat Network and Enterprise Services (CANES) is a more integrated and flexible virtualized network that provides users with updated software and services, such as improved information assurance and intrusion detection.

According to Information Systems Technician 1st Class Chris Martinez, every ship platform has its own set version of CANES, but Blue Ridge, as a command and control flagship, is getting its own special installation with an emphasis on infrastructure.

In addition, Information Systems Technician Chief Petty Officer Travoria Young said "We are the first ship to upgrade to this version of CANES. This is the largest CANES installation in the Navy thus far with the latest updated version available to the fleet."

This version is currently being installed on both Blue Ridge-class command ships, Blue Ridge and U.S. 6th Fleet flagship USS Mount Whitney (LCC 20). Young and Martinez said that the planning for the installation has been a long and demanding process.

The projected completion date for the ship's CANES update is Sept. 2017. However, this doesn't take into account the amount of training and preparation required to get the Information Services Department up to speed with the new network before deployment.

"We need to make sure that everybody is prepared before deployment, and has the right software needed for fulfilling mission accomplishment as well as day-to-day tasks," said Martinez. "We have people working hard all day, every day just to get the job done. To be honest, I'm actually really proud of my Sailors with the way they've been pushing forward and pushing through."

The efforts and progress of Blue Ridge's upgrade comes with a number of benefits. The biggest differences between CANES and its legacy networks is virtualization, the ability to navigate and troubleshoot across the network from one location.

"We took everything out of its own physical box and put it in one that runs like an emulator," said Martinez. "It's all virtual at this point. It's no longer just one server that is physically dedicated to a specific task."

The CANES upgrade won't just benefit Blue Ridge, it will positively impact the 7th Fleet area of operations and the entire Navy as a whole, said Young.

"The entire fleet is actually supposed to receive the CANES upgrade to be in alignment, up to date and flying under the same banner in terms of the software base we're using," said Martinez. "That is going to enhance communication across the board for our fleet forces. And, when it really comes down to it, we're striving for readiness because we are still a war-time fighting force. We always need to be ready and prepared and CANES provides us the tools to get that job done."