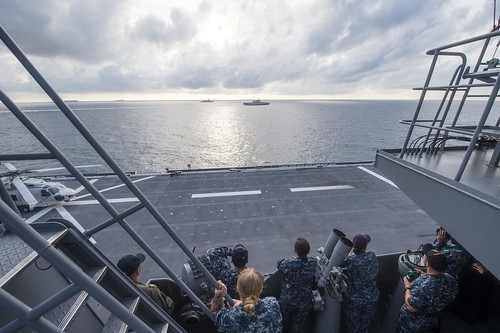 Sailors from USS Coronado (LCS 4) watch their ship steam alongside from aboard JS Izumo (DDH 183) during a passing exercise, May 18. (U.S. Navy/MC3 Deven Leigh Ellis)

The PASSEX included personnel exchanges, cross-deck flight operations, communications exercises, division tactics, a tracking exercise and photo exercise. The bilateral event aimed to enhance interoperability between the two navies and emphasized the importance of communications and coordination while operating together at sea.

“This was another great opportunity for the U.S. Navy to work closely with JMSDF at sea,” said Capt. Alexis Walker, deputy commodore, Destroyer Squadron 7. “Integrating the crews through personnel exchanges allows our sailors to build and strengthen the personal relationships that are the foundation of our naval partnership.”

“The U.S.-Japan alliance is stronger than it has ever been, and it is growing stronger,” remarked Rear Adm. Yoshihiro Goka, commander, Escort Flotilla One. “Conducting bilateral exercises with U.S. Navy regularly, JS Izumo and JS Sazanami will contribute to regional peace and stability in this Indo-Asia-Pacific region.”

Participating for the U.S. Navy was the littoral combat ship USS Coronado (LCS 4), and her commanding officer, Cmdr. Doug Meagher, talked about the importance of the exercise.

“This PASSEX allowed the Coronado crew to operate and train side-by-side with professional sailors from one of the world’s most capable naval forces,” said Meagher. “Our ships executed flawlessly while operating in close proximity, and that’s a testament to not only the expertise of the U.S. and JMSDF sailors, but also to the strength of our naval partnership.”

The three ships conducted precision maneuvering events and communication exercises while underway, both focused on ensuring the two navies are prepared to work together efficiently in future operations.

“My ship, JS Izumo, the largest ship in the JMSDF, has high capability in support of HA/DR activities in this region,” said Capt. Yoshihiro Kai, commanding officer, JS Izumo. “This bilateral exercise improved our teamwork, tactical skill and readiness.”

A PASSEX is unique because it allows navies to operate closely and in ways shore exercises do not allow. It further provides the crews with real-life situations to practice their everyday watchstanding and communication skills with foreign vessels.

Prior to the PASSEX the three ships participated in the International Maritime Defense Exhibition (IMDEX) in Singapore. IMDEX is one of the largest maritime exhibitions in the Asia-Pacific region, featuring a trade show and a series of multilateral exercises and exchanges.