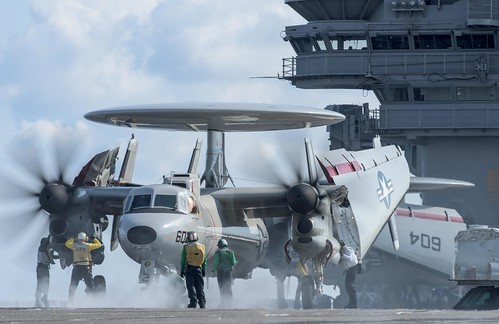 Over the course of three days, nine squadrons from CVW-5 flew more than 70 aircraft onto the flight deck of Ronald Reagan to integrate with Carrier Strike Group Five for their 2017 Patrol.

"It's great to welcome back aboard the combat power and capability that our air wing shipmates bring to the team," said Capt. Buzz Donnelly, Ronald Reagan's commanding officer. "We have an exciting patrol ahead of us and I look forward to being back at sea with the strike group as we work together with our allies and partners in the region."

CVW-5 is the always-ready, air-combat arm of Battle Force 7th Fleet, with warfighting assets that include the F/A-18E/F Super Hornet, EA-18G Growler, C2-A Greyhound, and MH-60R/S, as well as the latest addition of the E-2D Hawkeye after the “Tigertails” of Carrier Airborne Early Warning Squadron (VAW) 125 replaced the “Liberty Bells” of VAW-115 earlier this year.

“With significant improvements to the radar, and other electronic sensors, the addition of the “Tigertail” E-2D aircraft and crew greatly enhance the warfighting capabilities of the strike group,” said Capt. Michael Wosje, commander, CVW-5.

Ronald Reagan and CVW-5 are slated to conduct flight deck and carrier qualifications to certify their ability to safely launch and recover aircraft following Ronald Reagan’s completion of sea trials.

“It’s great to be back onboard Ronald Reagan,” said Wosje. “The assets and capabilities of the FREEDOM/BADMAN team are more powerful than ever. Now that we are back to sea, we can focus on building our pilots’ and aircrews’ proficiencies as we re-integrate our platforms with the carrier strike group.”