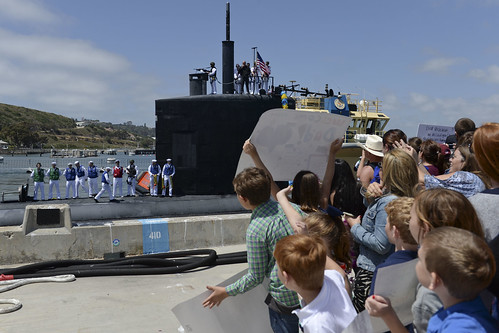 SAN DIEGO - The Los Angeles-Class fast attack submarine USS Alexandria (SSN 757) returned to Naval Base Point Loma in San Diego, May 18, after a six-month deployment to the Western Pacific region.

Family and friends, along with members of Submarine Squadron 11, gathered pierside armed with colorful banners and signs to greet the crew and welcome them home.

"We operated in nearly every ocean environment across the Western Pacific, doing missions that no other platform can conduct, in areas where no other platform can operate," said Cmdr. Todd Santala, Alexandria's commanding officer. "Our presence in theater provided significant operational flexibility to the fleet and task force commanders."

"Despite the high operational tempo, the crew tackled every mission with the enthusiasm and tenacity we are known for," said Santala. "I couldn't be more proud of what my men accomplished in service to their country."

The crew had another major accomplishment as well.

Thirty-three submariners earned their submarine warfare qualification, commonly known as dolphins, during the deployment -- 27 enlisted crew members and six officers. Two of these officers' fathers, who are former submariners, welcomed their sons home at the event.

"I'm glad to be back in San Diego," said Lt. j.g Chase Brown, quality assurance officer aboard Alexandria. "Getting my dolphins means added responsibility. Each day I worked for it and was able to choose what I wanted to learn."

Brown's father is retired Navy and was also a submariner.

"We are very proud of Chase," said retired Capt. Mike Brown, Chase's father. "It's very heartwarming to get him back from deployment. It's rewarding to know what he goes through. I know what deployment on a submarine is like with the struggles, challenges, and rewards."

"The greatest experience was to get my dolphins on deployment," said Lt. j.g Christopher Rogeness, the damage control assistant aboard Alexandria. "We had a really busy deployment this year, so it's a reward coming back home."

"To know the things that Chris and the ship did on deployment really make me proud," said Rogeness' father, Capt. Gary Rogeness, the naval attache and senior defense officer to Norway. "To have my son choose the submarine force, which is one of the hardest jobs, and then to thrive and earn dolphins - it's just unbelievable to see him like this."

Members of the 32nd Street Brass Band from Commander, Navy Region Southwest, played a catalog of music to entertain the families while they waited on the pier, which culminated in an upbeat, jazz-style rendition of "Anchors Aweigh."

Alexandria was commissioned June 29, 1991. Measuring more than 360 feet long and displacing more than 6,900 tons, Alexandria has a crew of approximately 140 Sailors. Alexandria is capable of supporting various missions, including anti-submarine warfare, anti-surface warfare, strike warfare, and intelligence, surveillance and reconnaissance. She is assigned to Submarine Squadron 11 and homeported at Naval Base Point Loma.