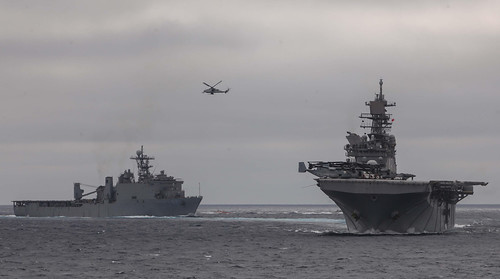 The 17-day event is the second of three at-sea periods within the integrated training phase aimed at preparing the ARG/MEU team for deployment by testing its ability to react to real-world scenarios and perform as an integrated unit providing a robust set of sea-based capabilities, an extensive set of ship-to-shore connectors, and the ability to respond to crises and deter transnational threats.

"COMPTUEX allows us the opportunity to demonstrate mobile, lethal and ready combat power," said Capt. Rome Ruiz, commodore of Amphibious Squadron 3. "This exercise has focused on integration, innovation, and sea control. Not only did the ARG/MEU integrate as a blue-green team, but we had the opportunity to integrate and establish sea control with other naval assets including destroyers and carrier strike group assets."

During the exercise, the ARG took tactical control of USS Preble (DDG 88), allowing the ARG to operate in a composite warfare concept structure, while conducting antisubmarine warfare operations. The ARG was also able to work together with the Theodore Roosevelt Carrier Strike Group to perform highly complicated air warfare evolutions.

"Moreover, innovation was the apex of honing our tactical excellence," said Ruiz. "Mastering new capabilities during this training phase harnesses the ARG/MEU distinct combat power and enables us to project power anytime, anywhere."

Pearl Harbor and her crew were the trailblazers of air innovation during COMPTUEX, embarking aircraft on board and maintaining them for three days, a feat not demonstrated by most amphibious dock landing ship and one that will extend the reach of the ARG in training and on mission. Additionally, each ship ran through a series of evolutions that tested the ARG's ability to respond to different scenarios, such as air-surface warfare, noncombatant evacuation operations, show-of-force transits, maritime infrastructure protection, visit, board, search and seizure (VBSS) drills, and air defense exercises, among others.

"We've done a wide array of exercises and used our assets to our advantage to protect the force," said Lt. Cmdr. Todd Blackman, gun boss aboard America. "We have a very capable team on America and in this ARG to support the nation."

COMPTUEX prepares the ship for deployment in a safe training environment where lessons learned can easily be applied going to the final training phase, Certification Exercise (CERTEX).

"COMPTUEX is the time for us to master our environment and resources," said Blackman. "It allows us to sharpen our capabilities and refocus our efforts in the most efficient way. The training environment provides us the opportunity to gain better insight into how to keep the ship and the ARG safe against whatever the aggressor may be, so that next time [during CERTEX] we can perform flawlessly."

The America ARG and the 15th MEU plan to execute integrated pre-deployment training in June during CERTEX to ensure the ARG is ready to deploy later this summer.

"COMPTUEX is vital to our workup cycle because it prepares us to face the threats we will potentially see on deployment," said Intelligence Specialist 1st Class (IW/SW/AW) Matthew Quirk, assigned to the ship's nautical or otherwise photographic interpretation and examination (SNOOPIE) team aboard San Diego. "One of the biggest lessons learned is that communication and logs are key. The ability to recreate events for national-level decision makers relies on this and enables us to see the trends and get ahead of the problem."

More than 1,800 Sailors and 2,600 Marines are assigned to the America ARG and the 15th MEU in preparation for the ARG's deployment later this year.

The ARG and accompanying MEU is comprised of a team whose combined skill sets allow them to execute a wide variety of missions, to include, humanitarian assistance and disaster relief, amphibious assaults, VBSS, maritime interdiction operations, noncombatant evacuation operations, tactical recovery of aircraft and personnel, and theater security operations.

America ARG is part of U.S. 3rd Fleet, which leads naval forces in the Pacific and provides the realistic, relevant training necessary for an effective global Navy. U.S. 3rd Fleet constantly coordinates with U.S. 7th Fleet to plan and execute missions based on their complementary strengths to promote ongoing peace, security, and stability throughout the entire Pacific theater of operations.