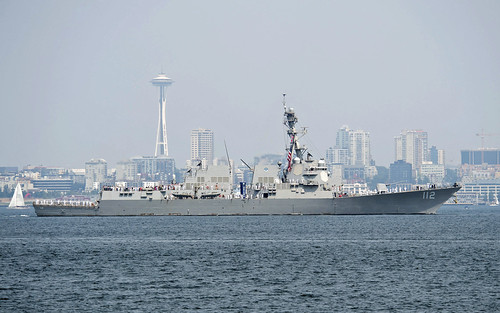 Throughout the week American and Canadian service members will be participating in multiple community outreach events, including performances from Navy Band Northwest and the U.S. Navy flight demonstration squadron, the Blue Angels, ship tours, environmental educational displays, and hospital visits.

"We need to stay connected with the people we’ve sworn to defend, and fleet weeks help with that. So come see the ships, but more importantly, speak with our Sailors; they’re what the Navy is all about,” said Vice Adm. Nora Tyson, commander, U.S. 3rd Fleet and native of Memphis, Tennessee.

“Seafair has hosted Fleet Week on the Seattle waterfront since 1950 in celebration of the men and women who serve our country. This year Seafair, along with the Seattle Navy League and the Port of Seattle, is proud to welcome vessels and personnel from the U.S. Navy, U.S. Coast Guard and Royal Canadian Navy,” according to the Seafair website.

The inaugural U.S. Navy Fleet Week was in 1935, in San Diego. That same year multiple cities across the nation hosted their own Fleet Weeks, each with their own unique culture to put on display, including New York, San Francisco and Ft. Lauderdale, Florida.