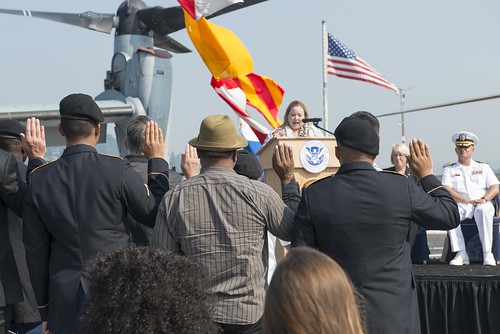 SEATTLE - San Antonio-class amphibious transport dock ship USS Anchorage (LPD 23) hosted a naturalization ceremony as part of the 68th Annual Seafair Fleet Week in the Port of Seattle. Seafair Fleet Week is an annual celebration of the sea services wherein Sailors, Marines and Coast Guard members from visiting U.S. Navy and Coast Guard ships and ships from Canada make the city a port of call. The Seafair Naturalization Ceremony is unique in that the location used is not a stationary public venue, but rather on an operational Navy vessel.

Ten applicants from ten different countries were chosen to complete their journey to citizenship on the flight deck of USS Anchorage in a ceremony on Friday morning as the sun beamed brightly overhead. Senior Chief Navy Counselor Jean-Hero Lamy, who himself became an American citizen in Haiti, delivered a humbling speech in which he beseeched the soon-to-be Americans to welcome the opportunities America has to offer.

U.S. Senator Patty Murray continued the theme in her keynote address to the crowd. “Given your paths that you’ve taken to get here, I am filled with hope for the paths you have in front of you,” she told the ten candidates, each of whom is either a current service member or is a United States veteran. On the flight deck of a Navy warship with an MV-22 Osprey, a UH-1 Huey, and an American flag as a backdrop, the candidates then took the oath of allegiance and received their Certificates of Naturalization for U.S. Citizenship from Senator Murray and Captain Dennis Jacko, commanding officer of Anchorage.

Naturalization is the manner in which a person not born in the United States voluntarily becomes a U.S. citizen. Before being eligible for citizenship, all non-citizen service members who apply must be able to demonstrate good moral character, have no criminal record, speak English, demonstrate knowledge of the U.S. government and history, and take the oath of allegiance to the U.S. Constitution.