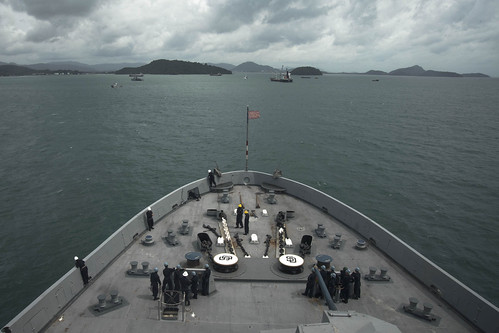 After recently completing a successful visit to Cam Ranh International Port, the crew has been looking forward to their next stop in a country that has been a longstanding friend and ally to the U.S. Navy.

"There's a lot of Sailors and Marines [aboard] that are excited to pull into this great liberty port," said Capt. Pete Collins, commanding officer of San Diego. "We all understand that we are here to make an impression but also to enjoy our time in Phuket experiencing a different culture than what most of us are used to."

Sailors and Marines aboard the San Diego will have the chance to participate in recreational activities in Phuket and surrounding areas to include snorkeling excursions, Phuket's most admired monasteries, private boat tours around caves and lagoons, and speedboat tours.

"There's a lot that Morale, Welfare, and Recreation (MWR) has to offer during our visit to Phuket," said Aviation Support Equipment Technician 3rd Class Angus Moss, a Sailor aboard San Diego. "I had such a great experience with the MWR trips in Cam Ranh International Port. I can't wait to pull into Phuket to take advantage of all of it."

San Diego, capable of carrying Marines and their equipment, has been at sea conducting training in the Indo-Asia-Pacific region over the past several weeks since departing its homeport of San Diego in early July. After stopping in Phuket, San Diego will continue training and operations with allies and partners in the U.S. 7th Fleet.

Commissioned in 2012, San Diego is the sixth ship in the San Antonio-class of amphibious landing transport dock ships. Designed as a multi-mission amphibious warship, these ships are able to support a broad range of expeditionary operations. The ship's namesake comes from the city of San Diego which has a long mutal history with the U.S. Navy and is the fourth vessel to bear the name.

San Diego, part America Amphibious Ready Group (ARG), is currently operating in the Indo-Asia-Pacific region to strengthen partnerships and serve as a ready-response force for any type of contingency.