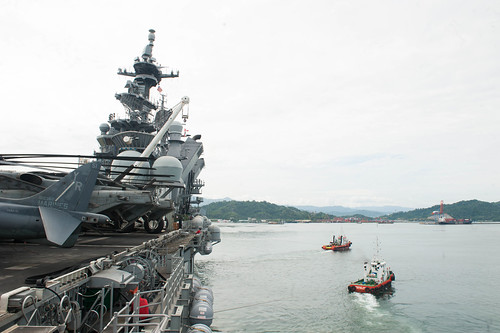 While in Malaysia, Sailors and Marines hosted shipboard tours for members of the Royal Malaysian Navy and local police force, participated in various sporting events and cultural tours in the town of Kota Kinabalu.

"Visiting Malaysia was a very enlightening experience,” said Lt. Daniel Espinoza, a native of Fresno, California, assigned to the ship’s Engineering department. “Getting to see how the people here live, and how different their culture is from the United States was very eye-opening for me.”

The morale, welfare and recreation (MWR) tours for Kota Kinabalu allowed Sailors the opportunity to see and traverse some of the most exotic parts of Malaysia via scenic hikes, evening river cruises and zip-lines over crystal blue water.

“The coolest part about (going on an MWR tour) was that we were able to see parts of Malaysia we wouldn’t have been able to see otherwise,” said Lt. Justin Bernard, a native of Aurora, Colorado, chaplain assigned to the 15th MEU, who hiked the Tunku Abdul Rahman National Park. “We got to experience island life and reef culture; without that tour, we wouldn’t have had that opportunity.”

“The opportunity to play a friendly game of soccer in a foreign country with their navy was definitely a highlight of this deployment for me,” said Adjasu, the America soccer team coach. “We may not have won the game, but we definitely won some new friends.”

After visiting Malaysia, America will continue training with allies and partners in the U.S. 7th Fleet area of operations. America, part America Amphibious Ready Group (ARG), is currently operating in the Indo-Asia-Pacific region to strengthen partnerships and serve as a ready-response force for any type of contingency.