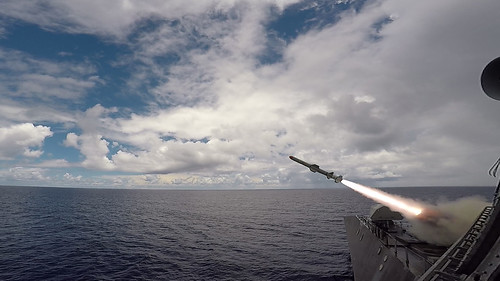 A Harpoon missile launches from the missile deck of USS Coronado (LCS 4) off the coast of Guam, Aug. 22. (U.S. Navy/FCC Adam Hoffer)

GUAM - The littoral combat ship USS Coronado (LCS 4) conducted a successful live-fire of the Harpoon Block 1C missile off the coast of Guam Aug 22, striking a surface target at significant distance beyond the ship's visual range.

"LCS will play an important role in protecting shipping and vital U.S. interests in the maritime crossroads," said Rear Adm. Don Gabrielson, commander, Task Force 73. "Its ability to pair unmanned vehicles like Fire Scout with Harpoon missiles to strike from the littoral shadows matters - there are over 50,000 islands in the arc from the Philippines to India; those shallow crossroads are vital world interests. Harpoon and Fire Scout showcase one of the growing tool combinations in our modular LCS capability set and this complex shot demonstrates why LCS has combat as its middle name."

"Our crew and air detachment really came together as a team to accomplish this live-fire event," said Cmdr. Douglas Meagher, commanding officer of Coronado. "Our Sailors worked hard to prepare for this exercise and I'm extremely proud of the way they performed."

Harpoon is an all-weather, over-the-horizon weapon designed to execute anti-ship missions against a range of surface targets. It can be launched from surface ships, submarines and aircraft and is currently used on 50 U.S. Navy ships: 22 cruisers, 21 Flight I destroyers, seven Flight II destroyers, and select littoral combat ships.

Coronado's successful strike on a target using the Harpoon missile system follows a test fire of the Harpoon that was conducted in July, 2016 during RIMPAC. Lessons from the RIMPAC test informed preparations and helped set the team up for success this time.

"USS Coronado's success in a real-world deployment of the Harpoon missile system is a result of how we are changing the way we operate and think about LCS," said Capt. Lex Walker, commodore, Destroyer Squadron 7. "By focusing on how a deployed LCS fits in the larger maritime domain with regional partners, we are ensuring a secure and cooperative regional environment while increasing the ship's capabilities." 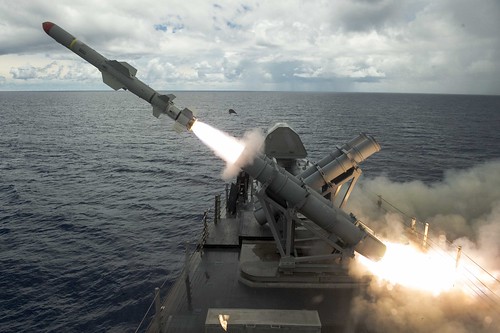 Another view of the Harpoon missile being launched. (U.S. Navy/MC2 Kaleb R. Staples)