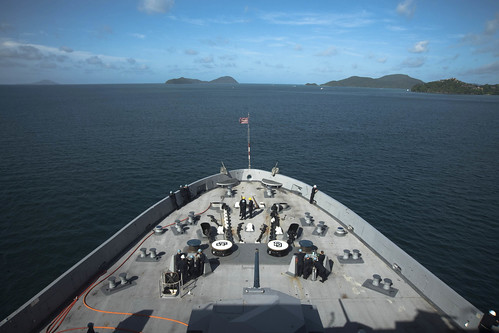 Sailors assigned to the deck department aboard the USS San Diego (LPD 22) tend to the anchor chain on the ship’s forecastle in preparation for the ship’s departure of Phuket , Aug. 22. (U.S. Navy/MC3 Justin A. Schoenberger)

The San Diego is capable of carrying Marines and their equipment and has been at sea conducting training and operations in the Indo-Asia-Pacific region since departing its homeport of San Diego in early July. They also recently completed a port visit to Cam Ranh International Port in Vietnam.

"I think I can speak for everyone when I say that we had a great time in Phuket," said Staff Sgt. Dana Cisneros, assigned to the 15th Marine Expeditionary Unit (MEU) aboard San Diego. "Whether through tours, or on your own, the island had so much to see and experience."

Sailors and Marines aboard the San Diego were given the opportunity to explore the island of Phuket and experience places such as the Khao Ping Gan and Khao Tapoo better known as "James Bond Island", the breathtaking view of Phang Nga Bay, snorkeling at Tonsai Bay, and the chance to participate in elephant trekking.

"I was able to go on the safari tour, ride on top of an elephant and have fish nibble at my feet as part of a fish spa," said Seaman Alexandria McClain, assigned to the deck department aboard San Diego. "Those are things that I feel I would have never experienced if it wasn't for MWR."

After visiting Thailand, San Diego will continue training with allies and partners in the U.S. 7th Fleet area of operations. San Diego, part America Amphibious Ready Group (ARG), is currently operating in the Indo-Asia-Pacific region to strengthen partnerships and serve as a ready-response force for any type of contingency.