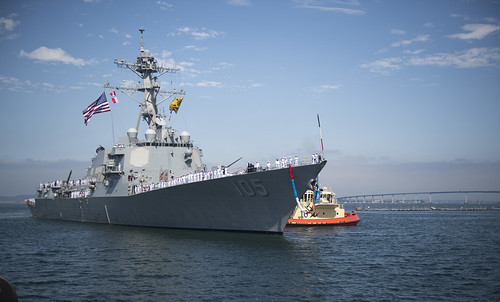 Los Angeles Fleet Week offers the public an opportunity to take a tour of the ships and meet service members as they showcase the ships' capabilities. It also gives the public a chance to gain a better understanding of how the sea services support the national defense of the United States and freedom of the seas.

Throughout the week, service members will have an opportunity to interact with the local community, while participating in a number of community relations projects and a Science, Technology, Engineering and Mathematics (STEM) exposition.

The fleet will arrive in Los Angeles between Aug. 29 and Sept. 1. The public will have the opportunity to tour the ships and meet Sailors in the Port of Los Angeles, next to the USS Iowa Museum, Sept. 1-4 from 9:00 a.m. to 3:30 p.m. The public is encouraged to attend tours and interact with Sailors, though visitors are asked to secure a reservation for a tour through the Los Angeles Fleet Week website, www.lafleetweek.com.