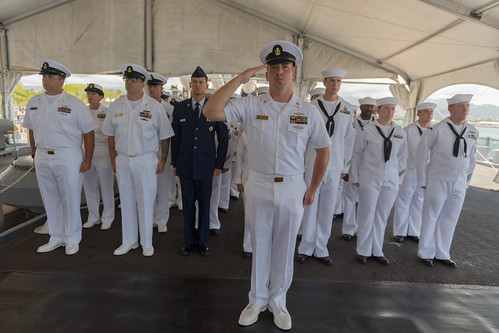 The CPO Legacy Academy has taken place aboard the Battleship Missouri Memorial since 2007.

The CPO Legacy Academy is a six-day course, which chief selectees live aboard the Battleship Missouri Memorial alongside chief mentors to learn about the history and heritage of the U.S. Navy and the chief petty officer community.

“To lead the future of our great Navy, we must understand our heritage,” said Command Master Chief David B. Carter, command master chief for Commander Navy Region Hawaii. “That is why I believed the USS Missouri is the ideal location for our CPO Legacy academy. She is an inspiring symbol of our past, with an outstanding legacy.”

The CPO Legacy Academy gives chief selectees the opportunity to spend time with senior enlisted and prior legacy alumni.

“This program embodies the role of today’s Chiefs,” said Chief Master at Arms Jonathan Prichard assigned to the USS Michael Murphy (DDG 112), a CPO Legacy Academy alumni and mentor. “A Chief is tasked with more than just making sure a job gets done, the Chief is the keeper of Navy traditions and values, and we are charged with passing that down to our Sailors.”

While aboard the Battleship Missouri Memorial, the chief selectees participated in preservation activities, leadership training, reenactment scenarios, and visited numerous historical sites around Pearl Harbor all designed to help prepare the selects for their future roles as chief petty officers.

“They have been immersed in the legacy of this great ship and our Navy, and now have a greater understanding of what it means to be a Chief,” said Carter. “As “the Chief” our CPO selectees will be expected to share their knowledge and experience to those coming up behind them, as to ensure that those who have made the ultimate sacrifice before them did not do so in vain.”

In its ten years, The USS Missouri CPO Legacy Academy has assisted many service members in learning what it means to be a Chief.

“As a chief, you never stop learning, that should be first and foremost in your thought process,” said Senior Chief Information Systems Technician Dan Hallman, attached to Naval Computer and Telecommunications Area Master Station Pacific and lead coordinator for the Legacy Academy. “The old call is “Go ask the Chief” and it’s only through our combined knowledge that we as Chiefs can answer that call.”

For the chief selectees, the Legacy Academy is just one step on their long journey to becoming "the Chief."

“I am grateful and humbled to take part in something so steeped in our Navy’s values and traditions,” said Chief (Select) Hospital Corpsman Zeila Vasquez attached to Naval Health Clinic Hawaii. “Through the hardships of this course, we have learned that our greatest strength comes from the shared knowledge and experience we all have, that strength is something I can share with my Sailors, for as long as I serve.”

At the close of WWII, Fleet Admiral William Halsey shared this anecdote when asked about an exchange between him and a retired Chief, “That man was my Chief when I was an Ensign and no one before or after taught me as much about ships or men as he did. You civilians don’t understand, you see those battle ships sitting there and think they float on the water, don’t you? You're wrong. They are carried out to sea on the on the backs of those Chief Petty Officers!”