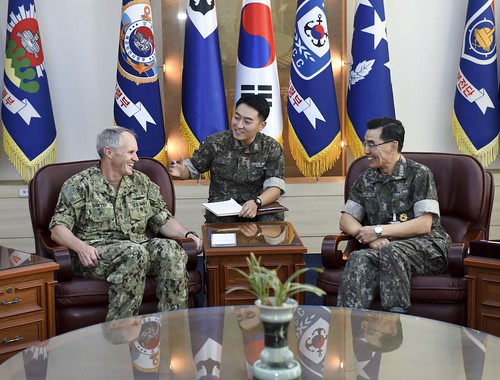 His visit, the first to the Korean peninsula since taking command on Aug. 23, included a meeting with Vice Adm. Jung, Jin-Sup, commander, ROK Fleet, and Cooper to sign a memorandum of understanding (MOU) between U.S. 7th Fleet and the ROK Navy.

“The partnership between our two navies is strong, and this MOU helps formalize the processes we use to coordinate our forces,” said Sawyer. “Enhancing our ability to integrate our fleets makes the alliance stronger in training and contingency operations.”

U.S. 7th Fleet is the largest of the U.S. Navy's forward deployed fleets. At any given time there are roughly 50-70 ships and submarines, 140 aircraft, and approximately 20,000 Sailors in the region. 7th Fleet's area of operation spans more than 124 million square kilometers, stretching from the International Date Line to the India/Pakistan border and from the Kuril Islands in the North to the Antarctic to the South.

Cooper adds his own confirmation to Sawyer’s regarding the strong relationship between the U.S.-ROK naval components.