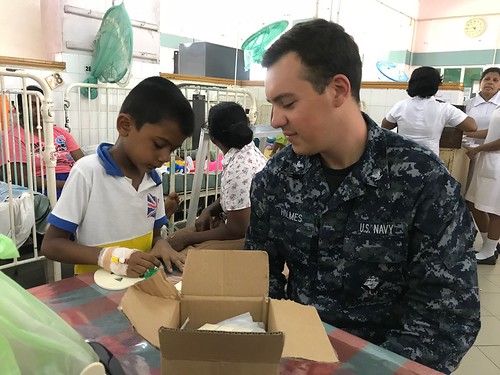 COLOMBO, Sri Lanka - Sailors from the Nimitz Carrier Strike Group and members of the U.S. Embassy in Sri Lanka visited children at Lady Ridgeway Hospital in Colombo, Oct. 29, during a port visit.

"This was great opportunity to really interact with some folks out in the community," said Lt. Cmdr. Scott Mehaffey, from Norfolk, the air warfare officer for Princeton. "We got to play with kids. That was the best part - seeing little kids and to be here for them. This is what it's really about. This is what we value as Americans - to be part of a bigger world, not just us."

The group split up and visited four children's wards during the visit. They talked with children and parents, passed out fruit and drinks, did crafts, and sang with children.

"It was good time, painting pumpkins and just interacting with the children," said Fire Controlman 1st Class Landon Menard, a Princeton Sailor. "I wanted to set a positive example for the sick children and let them know that it can and will get better."

According to Dr. W. K. Wickramasinghe, hospital director, this is the first time U.S. Navy Sailors have visited the hospital.

"I think it's a change," said Wickramasinghe. "Everybody sees the Sailors as military people, but there's a human side to them also."

Open since 1895, Lady Ridgeway is a teaching hospital that receives patients from across the country. The hospital treats around 1,000 children in the outpatient ward, along with around 300 in the inpatient ward, and is one of the largest children's hospitals in the world. All services at the hospital are free of charge in keeping with the free state health care policy of the Sri Lankan government.

Patient care is a priority at the hospital, said Wickramasinghe, which often limits the amount of time staff can spend interacting on a personal level with children. That made the Sailors' visit even more special.

"I think every parent would welcome somebody to come talk to [the children] from the heart," said Wickramasinghe. "People are busy and there's not much time for [staff] to interact, other than the patient care. Having other well-wishers come in and interact helps to get [patients] cured."

This is the first time a U.S. Navy carrier strike group has pulled into Sri Lanka since 1985. The Nimitz Carrier Strike Group is on a regularly scheduled deployment in the 7th Fleet area of operations in support of maritime security operations and theater security cooperation efforts.