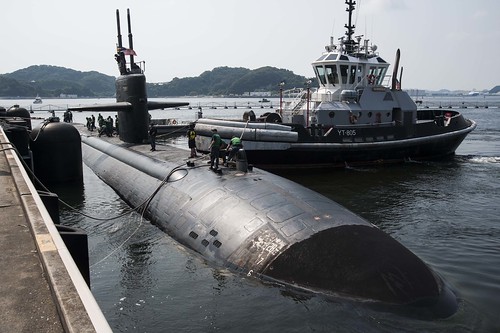 The visit strengthens the already positive alliance between the U.S. and Japan through the crews’ interaction with the Japan Maritime Self Defense Force. It also demonstrates the U.S. Navy’s commitment to regional stability and maritime security in the U.S. 7th Fleet area of operations.

“I’m incredibly proud of the crew and what they have accomplished over the past couple of months,” said Cmdr. Grady Hill, commanding officer. “Their hard work and preparation for deployment was evident in their flawless execution of complex operations. Now we have a new mission at hand – representing the United States while enjoying the sights and experiences that Japan has to offer.”

“The Sailors of this warship have worked very hard this year and we have accomplished a lot,” said Command Master Chief Eric Baker, chief of the boat. “Key West is excited to be back in Japan to enjoy some well-deserved and outstanding liberty.

“This will be my third time in Japan and my second time visiting Yokosuka. I’m really excited to show my friends around who have never been to this port of call before,” said Electronics Technician (Radio) 3rd Class John Spetter.

Key West was commissioned Sept. 27, 1980 in Norfolk. It completed many successful Eastern Atlantic deployments. In 1996 Key West transited the Panama Canal on the way to its new homeport in Hawaii. In 2012 Key West shifted to its current homeport of Guam.