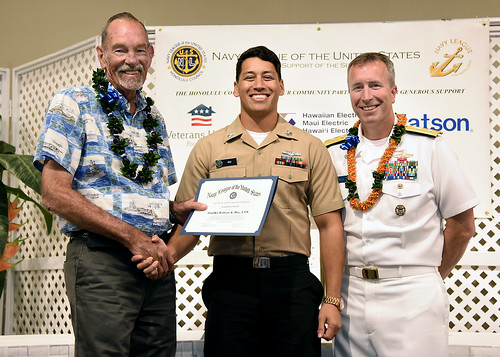 The sea service award is the Navy Leagues way of recognizing top performers throughout the sea going services.

“The service members here today are great examples to our children, sea cadets, boy scouts and girl scouts,” said Jane Ferreira, executive director, U.S. Navy League Honolulu Council. “There’s no better mission than to serve those who serve and we look forward to doing more of that again, and in any way we can.”

A total of 52 service members from the Navy, Marine Corps, and Coast Guard were honored for their performance throughout the year.

“The award itself is beautiful but to be held in such high regards alongside incredible Sailors, Marines and Coast Guardsman is the true honor," said Roy, COMPACFLT Sailor of the Year.

The Navy League of the United States, founded in 1902 with the support of President Theodore Roosevelt, is a nonprofit civilian, educational and advocacy organization that supports America’s sea services.