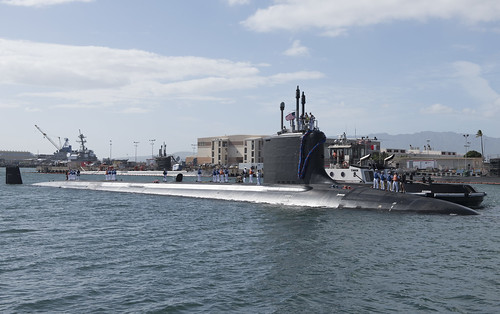 Illinois is now assigned to Submarine Squadron 1, headquartered at Joint Base Pearl-Harbor Hickam.

“Settling into a new home is always a challenge but the Navy has an outstanding support structure in place for service members and their families which greatly reduces the stress,” said Cmdr. Neil J. Steinhagen, commanding officer of Illinois. “Programs like these allow us to focus more of the ship’s resources toward mission preparedness.”

Illinois was commissioned and christened by the ship’s sponsor, former First Lady Michelle Obama, during a ceremony at Submarine Base New London in Groton, Connecticut, Oct. 29, 2016.

It is the 5th Virginia-class submarine stationed in Pearl Harbor.

“The support from Submarine Squadron 1 and Naval Submarine Support Command Pearl Harbor has been unmatched,” said Master Chief Machinist’s Mate-Submarine Auxiliary Jack White, Illinois’ chief of the boat. “The crew is energized for the transition and the opportunity to see more of what the Navy has to offer with this great experience.”

Illinois’ ombudsman Rebecca Steinhagen said the transition from Connecticut to Hawaii was smoother than she anticipated. “There are always bumps in the road with a move this big but the squadron was great to step in and help us take care of those bumps,” said Steinhagen. “Things like communication and the drastic time difference are also a factor.”

Steinhagen said the crew and families are excited for the transition from Connecticut to Hawaii.

“The crew and families are ready and anxious to get here and enjoy this weather year round,” said Steinhagen.  Illinois is 377 feet long, has a 34-foot beam, and will be able to dive to depths greater than 800 feet and operate at speeds in excess of 25 knots submerged while displacing approximately 7,800 tons submerged.

It is a flexible, multi-mission platform designed to carry out the seven core competencies of the submarine force: anti-submarine warfare; anti-surface warfare; delivery of special operations forces; strike warfare; irregular warfare; intelligence, surveillance and reconnaissance; and mine warfare.