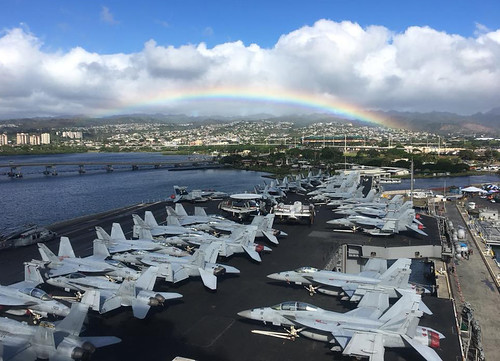 USS Nimitz (CVN 68) sits along the pier at Joint Base Pearl Harbor-Hickam after arriving for a port visit, Nov 25. (U.S. Navy/Lt. Cmdr. Christopher May)

JOINT BASE PEARL HARBOR HICKAM - The Nimitz Strike Group (CSG 11) arrived in Pearl Harbor Nov. 25 following a six-month deployment to the Arabian Gulf in support of Operation Inherent Resolve, and maritime security efforts in the Indo-Asia-Pacific.

“Our entire team is excited to visit the great state of Hawaii,” said Rear Adm. Gregory Harris, commander, Nimitz Strike Group. “After a very successful combat deployment in 5th Fleet, everyone is looking forward to being able to rest and relax before returning home. A couple days enjoying all that Hawaii has to offer is a fitting conclusion to a deployment during which Sailors and Marines across the strike group demonstrated an outstanding commitment to excellence.”

Nimitz Strike Group is part of U.S. 3 rd Fleet, which leads naval forces in the Pacific and provides the realistic, relevant training necessary for an effective global Navy. U.S. 3 rd Fleet constantly coordinates with U.S. 7 th Fleet to plan and execute missions based on their complementary strengths to promote ongoing peace, security, and stability throughout the entire Pacific theater of operations.