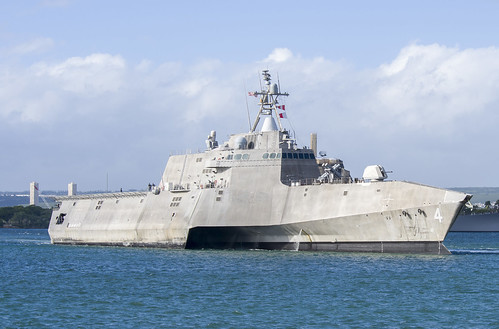 JOINT BASE PEARL HARBOR HICKAM - The littoral combat ship USS Coronado (LCS 4) arrived at Joint Base Pearl Harbor-Hickam, Hawaii, Nov. 25 for the final port call of a voyage to its San Diego homeport.

Since April, LCS Crew 203 has manned Coronado for all operations and exercises, including a successful Harpoon surface-to-surface missile engagement while operating with the Republic of Singapore Navy during exercise Pacific Griffin.

"Over the past eight months, the crew met each challenge with vigor and a sense of duty,” said Commanding Officer Cmdr. Douglas Meagher. “We were able to demonstrate the tangible value of the littoral combat ship program, and that is something each Sailor can be proud of.”

The Sailors say they are indeed proud of their accomplishments, and now they are ready to finish strong as they enjoy this last port call and then make the final leg of their journey home.

”Hawaii provides us with a final chance to relax and refocus on the mission of bringing Coronado home,” said Command Master Chief Joshua Jackson. “We’re eagerly waiting reuniting with our families and loved ones in the very near future!”

During the 18-month deployment, Coronado conducted exercises with 16 regional partner nations, participated in 11 multilateral and bilateral exercises, and made 10 strategic port visits across the U.S. 7th Fleet area of operations. Coronado’s 14 months in the Asia Pacific included coordinated counter-piracy operations with the Philippine Navy in the Sulu Sea, inaugural port visits to Cam Ranh, Vietnam and Lumut, Malaysia and presence operations in the South China Sea, Philippine Sea, Andaman Sea, and the Strait of Malacca and Singapore.

After Hawaii, Coronado will return to San Diego.

Coronado is the fourth littoral combat ship and second member of the Independence-variant. She is the third ship named after the city of Coronado. LCS is a high speed, agile, shallow draft, mission-focused surface combatant designed for operations in the littoral environment, yet fully capable of open ocean operations.

As part of the surface fleet, LCS has the ability to counter and outpace evolving threats independently or within a network of surface combatants. Paired with advanced sonar and mine hunting capabilities, LCS provides a major contribution, as well as a more diverse set of options to commanders, across the spectrum of operations.