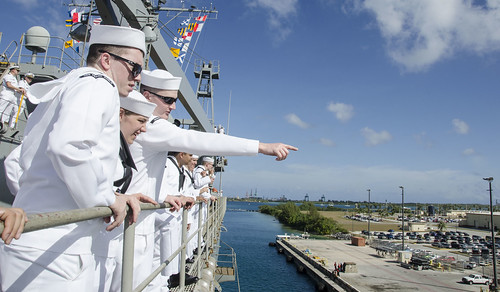 POLARIS POINT, Guam - Sailors and civilian mariners of the submarine tender USS Frank Cable (AS 40) returned to their homeport of Naval Base Guam, Jan. 23.

Family, friends and shipmates gathered on the pier with signs and flowers to welcome the ship and her crew as she pulled into the harbor.

After being away for ten-and-a-half months, and sailing more than 12,614 nautical miles, the island was a welcome sight for many Sailors aboard the ship.

"It doesn't feel real yet because we've been gone for almost 11 months," said Duff. "Now that I see the island, it's becoming more of a reality. It feels nice to be back."

For some Sailors who checked onboard while the ship was undergoing maintenance, it was their first time seeing their new home.

"It feels good being here after 10 months," said Information Systems Technician 2nd Class Kelly Lane. "It's been 10 months since I PCS'd from my last command, so I'm happy to finally get to homeport."

Whether new to the command or previously onboard, many of the Sailors were looking forward to enjoying life on land.

"It's the simple things, like being able to have my own car, hang out with my friends and go to the beach, like I used to," said Duff. "I'm excited to be back home just for the simple things."

Now that the ship has returned to Guam, and family and friends have reunited, the crew can refocus on the mission of Frank Cable.

"It feels great to be back in Guam," said Capt. Jeff Farah, commanding officer of Frank Cable. "Not only are the friends and families getting a chance to reunite, but we get a chance to build the camaraderie of our forward-deployed naval forces, and represent our primary mission of repairing, rearming and resupplying surface and submarine forces."