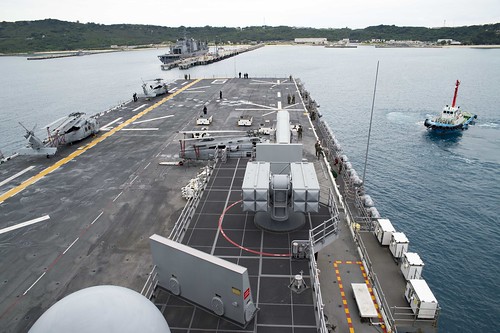 Bonhomme Richard set sail from Okinawa with 1,000-plus 3d Marine Division Marines, which included ground, air, and logistics elements, at the beginning of February to participate in the 37th iteration of Cobra Gold in the Kingdom of Thailand.

As part of a multitude of interoperability drills during the exercise, the Navy-Marine Corps team aboard Bonhomme Richard executed a combined amphibious assault together with Thai and Republic of Korea forces.

“It was a great experience working with the 3d Marine Division throughout this patrol and during exercise Cobra Gold,” said Capt. Larry McCullen, commanding officer of Bonhomme Richard. “The professionalism of the 3d Marine Division Marines ensured that we could work together to complete the mission safely and effectively. They are a fine group of Marines and we wish them well as they depart.”

3d Marine Division marines are deployed to the region on a rotating basis and often do not embark amphibious ships while in region since they are not assigned as part of a Marine Expeditionary Unit. The opportunity to embark on Bonhomme Richard and conduct Cobra Gold enhanced the 3d Marine Division’s crisis response capabilities.

"Bonhomme Richard's ability to safely and professionally transport and deploy 3d Marine Division aircraft and amphibious assault vehicles was vital to our mission completion during Cobra Gold," said Lt. Col. Steve Eastin, battalion commander, 3rd battalion, 3rd Marine regiment, 3rd Marine Division. "It was a pleasure working with Capt. McCullen and his crew. It takes both Marines and Sailors working together to succeed in amphibious operations, and we couldn't ask for better team to work with than Bonhomme Richard."

Bonhomme Richard is operating in the Indo-Pacific region as part of a regularly scheduled patrol to build on partnerships and provide a rapid-response capability in the event of a regional contingency or natural disaster. 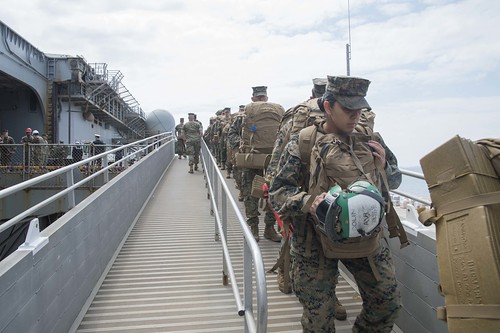