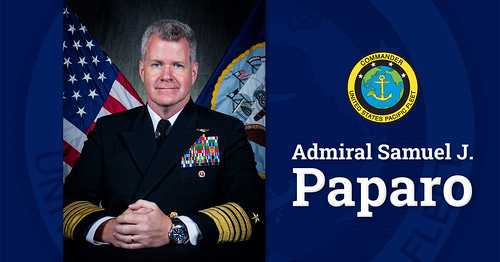 Paparo, a native of Morton, Pennsylvania, comes to the historic Pearl Harbor headquarters from Manama, Bahrain, as Aquilino did in May 2018. Both commanded U.S. Naval Forces Central Command, U.S. Fifth Fleet and Combined Maritime Forces immediately before arriving in Hawaii.

“I am honored and humbled to follow and serve in the footsteps and on the shoulders of giants in this critically important region accounting for 60 percent of world trade and 52 percent of the world’s population in 36 countries and an area spanning 14 time zones,” said Paparo. “The U.S. remains committed to a free and open Indo-Pacific that can only be achieved by the teamwork of like-minded partners, all working with a common commitment to upholding international law and the rules-based, international order.”

Paparo is the 37th commander since the fleet’s Pearl Harbor headquarters was established in February 1941. He is a graduate of the Navy Fighter Weapons School (TOP GUN) and has flown the F-14 Tomcat, F-15 Eagles and F-A-18 Hornet, among other aircraft. His full bio is available at https://www.cpf.navy.mil/leaders/samuel-paparo.

U.S. Pacific Fleet is the world’s largest fleet command with an area of responsibility that encompasses 100 million square miles, nearly half the Earth’s surface, from Antarctica to the Arctic Circle and from the West Coast of the United States into the Indian Ocean. The U.S. Pacific Fleet consists of approximately 200 ships/submarines, nearly 1,200 aircraft, and more than 130,000 Sailors and civilians.