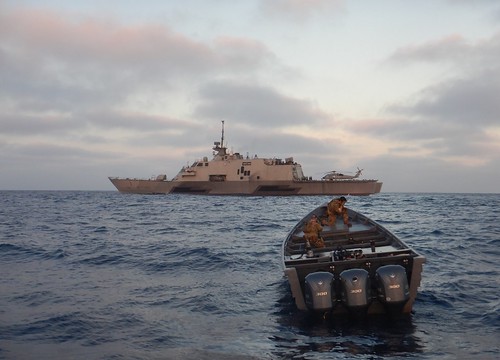 Freedom and embarked Helicopter Sea Combat squadron 23 detachment identified and approached the illicit drug transport boat. The Coast Guard LEDET then conducted a boarding, search, and seizure of the vessel.

"I want to thank Cmdr. Larry Repass, Freedom‘s commanding officer, the crew of USS Freedom and embarked Law Enforcement Detachment 107 for a successful interdiction yesterday," said Rear Adm. Brian Penoyer, Eleventh Coast Guard District commander. "This is yet another example of how important the relationship is between the Coast Guard and Navy. That relationship allows us to be an effective team, and because of that team effort we have removed an additional 3,450 pounds of illicit drugs from reaching the streets, and saving countless lives in the process."

Freedom and embarked personnel have been conducting counternarcotics missions in U.S. 4th Fleet since their departure from San Diego, Jan. 11. The counternarcotics interdiction efforts are aimed at thwarting transnational criminal organizations, which are fueled by drug trafficking money.

U.S. 3rd Fleet works in close coordination with other numbered Fleets to provide commanders with capable, ready assets to deploy forward and win in day-to-day competition, in crisis, and in conflict.