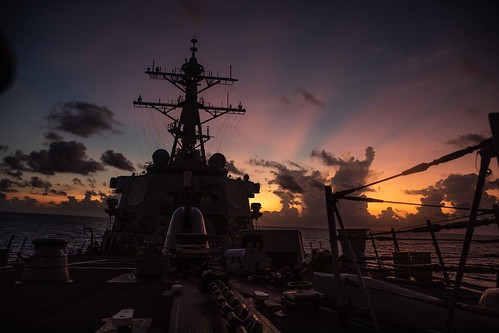 The establishment of CTF 71 formalizes command and control of assigned naval surface forces within the U.S. 7th Fleet area of operations to fulfill the mission of theater surface warfare commander. CTF 71 also serves as the sea combat commander for the Ronald Reagan Carrier Strike Group and maritime interdiction operations commander.

"We have integrated the Surface Task Force (CTF 71) into the 7th Fleet combat scheme of maneuver, theater security cooperation events, and crisis response efforts," said Vice Adm. Bill Merz, commander, U.S. 7th Fleet. "This was a natural organizational adjustment that reflects the increasing pace of operations throughout the region and is similar in structure to other numbered fleets. We've already enjoyed considerable and measurable improvements in combat readiness, task assignment, and overall mission effectiveness."

"Every day I am humbled to serve this mission and these Sailors as the commander of Task Force 71," said Capt. Chase Sargeant, commodore, CTF 71. "This Task Force was established to harness the advanced lethality and full spectrum of operational capabilities of our surface forces to meet 7th Fleet missions in defense of our national interests."

Sargeant said the cooperation and support from Commander, Fleet Activities Yokosuka has been vital for the task force, the Sailors, and their families.

"There are more than 2,000 Sailors, postured forward, who are the backbone of CTF 71," Sargeant said. "Their personal effort and dedication to their nation and its security ensures we are ready to respond to every challenge."

CTF 71 operates year-round, working with regional allies and partners to ensure peace and prosperity and promote a rules-based international order for all countries in the region. For more than 75 years, 7th Fleet forces have provided security throughout the Indo-Pacific.